Just as entertaining as the original 2004 movie, Tina Fey’s MEAN GIRLS packs a ferocious punch at the lives of teenage girls today seeking their own identity in the crazy world of high school. Add in belt-it-all-out-songs and high-energy choreography and you’ve got one fabulous night of theater! 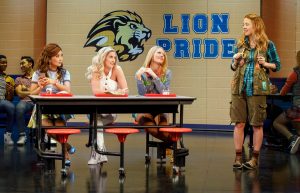 The plot maintains the same storyline as the popular movie, keeping many of the same funny one-liners and “Wednesday is Pink Day.” The show has been updated to include all of the perils of social media, making mean even meaner. 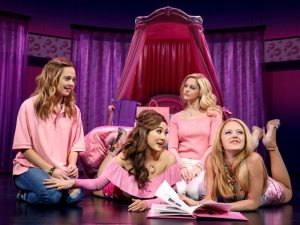 Cady Heron arrives from the wilds of Africa where she was home-schooled to North Shore High School in the Chicago burbs. Will this naïve newbie find her way and make new friends? Can she rise to the top of the popularity pecking order? Cady takes on The Plastics, a trio of mean girls, led by the meanest of all, Regina George. Cady devises a plan to end Regina’s reign and along the way she learns about loyalty, friendship and the pain of hurting those she cares about. It’s teenage angst to the max. 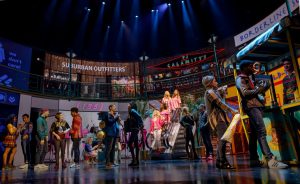 The sensational cast includes Erika Henningsen as Cady, Ashley Park as Gretchen, Taylor Louderman as Regina and Kate Rockwell as Karen. Stand outs include Barrett Wilbert Weed as Janis and Grey Henson as Damian, outsiders who long to be insiders. Kate Rockwell has the all the comedic chops down pat with just a look and steals every scene she’s in. And boy, can these girls sing! Vocals by Louderman’s Regina and Weed’s Janis will simply take your breath away. 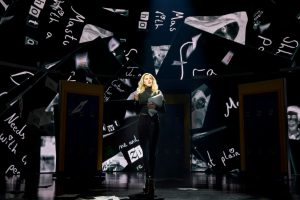 You’re sure to have a “fetch” night! Mean Girls is playing at the August Wilson Theatre, 245 W. 52nd St. in New York City. For tickets, go to meangirlsonbroadway.com.

“She Loves Me” Review – Old Fashioned Romance in Lincolnshire

May 6, 2017 Ellen Beth Gill Entertainment 0
Boy meets girl. Boy and girl fight. Boy and girl decide their animosity must be love. That’s old fashioned romantic comedy, and the basic plot of “She Loves Me,” the 1963 Broadway now playing at […]

August 1, 2019 Tony Sportiello Music & Arts 0
On July 31st, 2019 the legendary producer/director Harold Smith Prince passed away at the age of 91. The lights went out all over Broadway and well they should. For more than five decades Prince toiled […]

A Superb and Reimagined Wizard of Oz at the Paramount – Review

November 19, 2018 Suzanne Magnuson Entertainment 0
Since the film became a staple on American television generations have grown up with Judy Garland’s Dorothy and all of her friends in The Wizard of Oz. We know the Harold Arlen and E.Y. Harburg […]